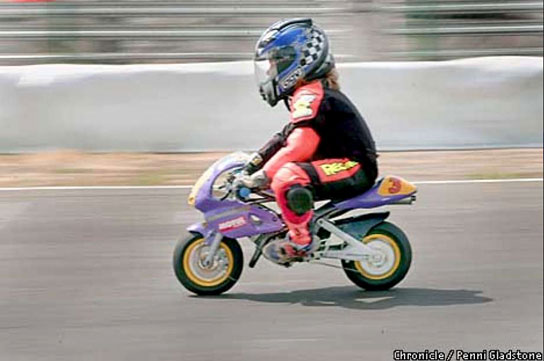 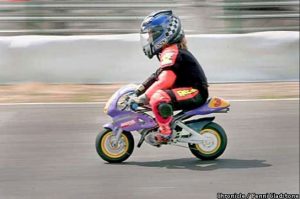 Willow Springs Raceway, April 2002: This is where my racing career began. I was an eight-year-old girl with a need for speed and a competitive spirit.

I fell in love with speed from the moment I rode my first roller coaster at Marine World in Vallejo, CA. I was thrilled by the feeling of the wind in my hair, the g-forces throwing me back into my seat, and the adrenaline rush. It didn’t matter if I had to get back in line by myself, I just wanted to keep going and going.

Sliding in the sand

Of course you can’t ride a roller coaster every day, but I could ride my BMX bike, so this is how I got my speed fix. I grew up across the street from my grandparents, whose backyard was the 17th green of the Discovery Bay golf course. I’d ride my bike on the street in front of my house and in the local parks, and every so often I’d go over to the golf course parking lot with my dad. There was always a layer of sand on the ground, and on occasion a pile of it. I would ride my bike down the hill as fast as I could, and then put on the rear brake  to slide a bit in the sand. It would always leave me with a huge grin on my face. This was one of the highlights of my life before motorcycles.

That, and golf. My grandparents and my father both enjoyed the sport and got me my first set of clubs at  three-years-old. I took many lessons, went to several golf camps and worked on my game whenever I could. I started playing in tournaments at seven-years-old. I played against girls that were my age. I found coming in second, as I did in the last two tournaments I played, demoralizing. I hated losing almost more than I loved winning, and to this day, that’s what drives me to do my best.

Around the time I was playing in the seven-year-old tournaments, my dad introduced me to motorcycles, and that completely changed my world. He bought me a purple Polini pocket bike, which is a miniature version of a sport bike. These bikes easily go 40 mph and to have that kind of speed available to me was just the coolest thing ever.

Although I still enjoyed golf, the speed and general cool factor of being a motorcycle rider shifted my focus from the golf course to the race course. I rode almost every week in local parking lots, on a course set up with traffic cones. Eventually I progressed to a go-kart track that was perfect for pocket bikes.

About a year later, my dad, being the crazy motorcycle fan and rider that he is, made plans with another pocket bike enthusiast in Southern California to host a pocket bike-only racing event for people of all ages. I was all over that. I felt ready to race and see how I stacked up against all the other kids in my age group.

So, there we were in April at the famous Willow Springs Raceway in Rosamond CA, just east of Bakersfield– my mom, my dad, my mini moto and me. We got to the facility a day early to set up the track and race. This event was being held on the drift car skidpad, which is like a big, wide open parking lot. It was a small course, less than a half-mile, that was designed with old car tires and traffic cones marking the corners. It was a setup I was very familiar with.

The weekend consisted of a practice day on Saturday and race day on Sunday. About thirty people showed up to compete, a pretty good turnout considering pocket bike races were uncommon in this country at that time. Men, women, and kids of all ages lined up in their respective classes to see who was the best that weekend. My dad had signed me up for a few races, all in junior classes, which happened to be filled with all boys. Most of my competitors were new to me except the Fong brothers, Bobby, Anthony and Joseph, whom I had ridden with several times in the local parking lots.

I got passed a lot during Saturday’s practice sessions. At this age, I didn’t know the first thing about bike set-up or technique, so each session I just hopped on my bike and went as fast as I felt comfortable with–which wasn’t exactly fast since I was still on a steep learning-curve. The practice sessions didn’t help my confidence much, but everyone’s has to start somewhere.

Nonetheless, when Sunday arrived, I was pretty darn excited! I was always that kid who showed up to the track completely dressed in my riding gear, all amped up to go, so you can imagine my enthusiasm about racing for the first time.

Getting back on the bike

We had a warm-up session in the morning so I went out for the 10 minutes or so we were given. Just as I was finally starting to feel a bit of confidence, WHAM! I caught my bar on one of the car tires and crashed. I immediately started bawling like a baby because I hurt my finger pretty bad.

My dad came and picked me up off the track and took me back to the truck. After taking off my glove, I saw blood all over my right hand middle finger, with my fingernail just hanging on by a thread. I got so upset, not just because of the pain, but because I  thought I was not able to race. I had fallen several times before, but only ever ended up with some bruises. This was a bit more traumatic.

There was an EMT on site who looked at my finger and said it was probably broken (which ended up being true). He said that my fingernail would need to come off so we could clean and bandage it up. I gritted my teeth and looked the other way as it was yanked it off. Pretty traumatic stuff for an eight year old! I wiped away my tears and had my finger wrapped up.

Shortly after, my dad asked me if I still wanted to race, to which I replied with a hesitant yes. I wasn’t sure if I could ride and use my hands properly to handle the controls.  I was allowed to do a warm-up lap in one of the  earlier races to see if I was ok. After completing it, I decided that I would be ok and I lined up for my first race a couple hours later.

A racer is born

To tell you the truth, I don’t remember much about the race itself, other than the excitement I felt leading the race and crossing the checkers in first! I couldn’t tell you how many other kids were racing against me, but at eight-years-old, I don’t think I really cared. I went on to race another couple races that afternoon and did well in those too, getting a podium in one.

At the awards ceremony later that afternoon, I received my trophies with a loud applause. I felt like I was on top of the world and from there on out, I craved that feeling.

We went out for dinner that night on our way home and celebrated a great weekend. I knew my parents were proud, but I can only imagine how my dad felt. We’ve always bonded over our love for motorcycles, so sharing that moment together was very special.

There’s a picture hanging in my parent’s attic somewhere of me holding my two trophies up over my head, with a massive smile on my face, and bandage on my finger. I wish I could dig that out to show you because it’s a priceless memento of a day filled with firsts: My first big crash, first race, and first win..

Looking back, I can see that I was a tough cookie even back then, and that’s what helped carry me through my racing career even when times got tough. That day I found it within myself to keep going even when things got difficult. I realized that picking myself up and getting back on the horse was the best way to conquer my fears and regain confidence–a lesson I’d draw on time and time again. Another lesson that was seared into my mind on that day: Pain is a part of the sport, and the glory makes it all worth it.