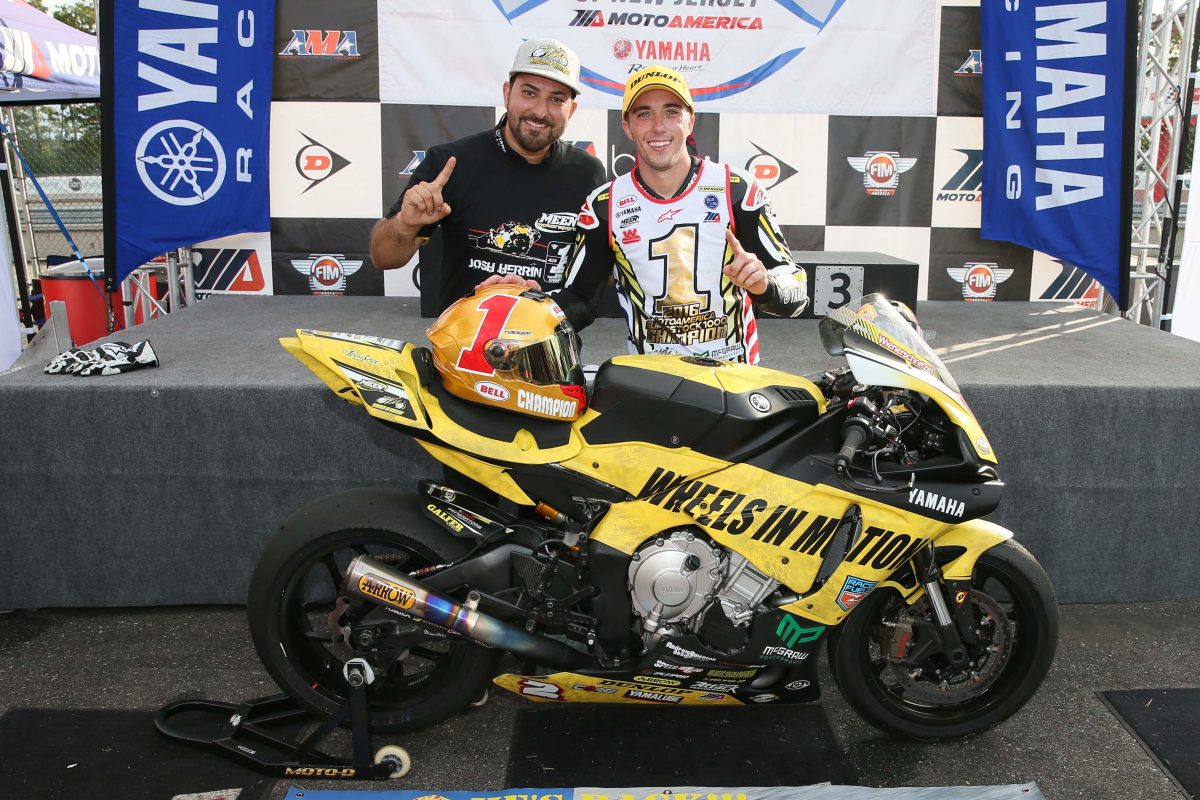 Ameen Sajjadi has been in the motorcycle industry for almost a decade. He is the owner of Meen Motorsports, a motorcycle shop based out of Valencia, California, and the owner of a professional motorcycle road racing team that competes in MotoAmerica, a U.S. racing series. Meen has a knack for fielding winners. In the past two seasons, Meen riders Joe Roberts and Josh Herrin have emerged victorious, with Roberts taking first place in the 2015 Supersport 600 class and Herrin winning the 2016 championship in the 1000 Superstock class. I got a chance to catch up with him and learn more about his success story.

Elena: First off, congratulations on your two championships in two years! How did you get to where you are today?

Ameen: I actually started with just a track day in, I think in 2007. After that, I met a couple of racers and realized that they’re really skilled at what they do, and it looked like a lot of fun. I wanted to get into it as a hobby, learn all the skills to get my race license and be able to race myself. I started asking around about what I needed to do and what kind of bike prepping was necessary to get a bike ready to race. Before I knew it, I was racing in 2008 with AFM (American Federation of Motorcyclists). At the time I also had a motorcycle shop so I thought, “Okay, well, I can promote my business somewhat but mainly I’m just doing the hobby for myself.”

After competing for a while, I decided I’d rather help somebody out that was quicker and more talented than me. I thought I could help promote my business better that way and that’s when the whole race team started. Tyler O’Hara was the first rider that we worked with. He made it so much fun to be a part of. He was super appreciative and introduced me to a lot of fast people; he took me on this journey of how exciting it was to be racing at the professional level and doing what we love. It evolved from there to having support from a manufacturer and being able to have two riders running in our nation’s premier road racing circuit.

At the end of the day, we all have the goal in mind to win championships, but for me, I got here based on the pure determination to succeed. I just love the sport, I love giving back and we’re trying to help riders get to the top level. We take it one day at a time, starting off with trying to get a win and once you get that itch, you continue to strive for more. Before you know it, your whole team has the same mentality and once you get that chemistry you try to put everything together to get the end result, which is the championship Discover More. I think just wanting to win really badly against all odds has been the reason why we’re where we are now.

Elena: Well, obviously, it’s taken off! As far as being a team owner goes, to what do you owe your team’s success?

Ameen: Really, it’s a lot to do with the riders. I tend to work with experienced riders who may have had a rough season and found that they need that smaller team atmosphere where we’re all fighting for and trying to help each other. I’d say a lot of the success has to do with the type of riders I work with, wanting to prove themselves to the rest of the community that they’re not done racing and they’re able to still win.

It’s just the right time, the right place, and great sponsors to be able to help me to get the right equipment. We always need the best equipment to win so I’d say a combination between my riders and my sponsors, and both of them have kind of grown with me. I have a lot of sponsors who have been with me from the beginning. I have a lot of new sponsors like McGraw Powersports that help us continue to push ourselves,
win different championships, and not just in one particular class. The riders make it a joy. It makes my job look easy.

Elena: What are the challenges that you’ve faced running a team and some of the obstacles you’ve had to overcome?

Ameen: One of the main challenges anybody runs into starting a team or a business is always finances–being able to control the money you have and trying to make sure it goes in the right direction when it comes to spending it. Then after the finances, it’s more along the lines of controlling some egos. You have riders that want things a certain way, and you got crew members that want things a certain way. We try to manage all that, and at the same time still try to promote our sponsors to make them look good and make sure everybody’s happy.

It’s a big juggling act wearing a whole bunch of different hats as a business owner, but it keeps you on your toes. It keeps it challenging, and makes it a lot of fun. I think being able to raise the money in a creative way is really important, and like I said, there’s a lot that goes into making sure that the team stays healthy. Then as far as the team atmosphere goes, you want everybody to be happy and want to show up to work. Sometimes that means you show up 5 a.m. and leave when the job is done. You can’t keep ’em all happy, but you gotta do your best.

Elena: How do you feel MotoAmerica did in terms of operations and regulations? How did it run as a whole and how did they do as far as giving your riders and team the right exposure?

I’m excited to see how we’ll do in 2017 knowing that they’re making changes on their own that are benefiting everybody; including sponsors, riders, and team owners. They’re trying to kick back anything they can towards the teams so that they can keep everyone motivated and keep going racing. Wayne Rainey is really trying to get everybody into the Superbike class, which is where most of the world wants to see the top-level riders. Hopefully, from there, we can try to get some riders overseas. We’ve definitely drawn a lot of riders from overseas to come over here, so that’s saying something. I think it’s a matter of time before everything is working in harmony.

Elena: Where do you see your team going in the future?

Ameen: Well, where I’d like to see myself going, and this has been something that I’ve always thought about, was being a premier class Superbike team where hopefully, one day, we can have two riders competing in it. I would like to see it be a consistent thing where Meen Motorsports shows up every year as a Superbike entry, and eventually leading into a potential factory deal. We would like to be involved in road racing at all the different levels in MotoAmerica, whether it be the 300 or 600cc classes, but the ultimate goal for me and my company is to run a Superbike team.