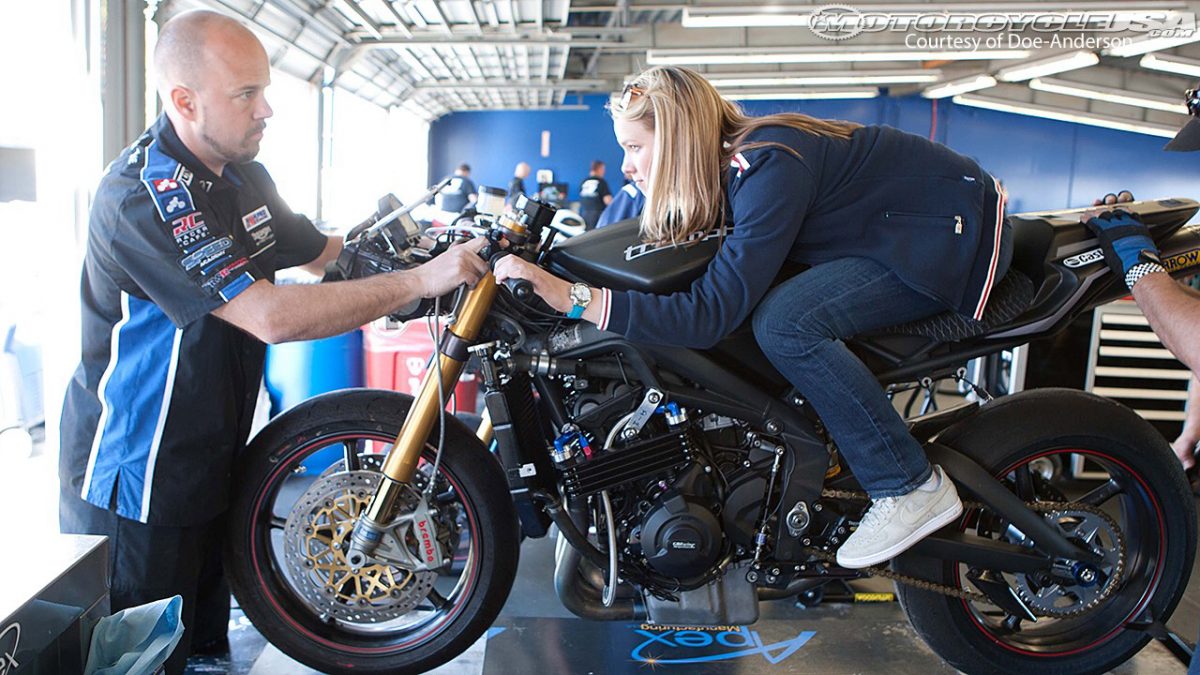 How much of a difference does a centimeter makes? How about a millimeter? In motorcycle racing, these miniscule measurements can separate a fast bike from a race-winning machine. In previous blogs I’ve discussed the elements of a rider’s preparation, but there’s also a lot that goes into preparing the bike–everything from skimming a couple millimeters off the top of a cylinder head, to adjusting the steering angle and ride height of the rear shock.

There are an infinite amount of directions to go when it comes to fine tuning a race bike. It starts when the bike gets built, but it doesn’t stop there. There’s a lot of testing during the preseason–the more, the better. During the racing season, riders change their bikes for the demands of specific tracks. They also make changes during the race weekends to respond to a variety of different conditions. Here’s a behind the scenes look at the never-ending quest for the perfect race bike. For the purposes of this article, I’m going to base everything around a MotoAmerica Superbike, since these bikes are allowed the most modifications of any MotoAmerica class.

It all starts at the race shop. Teams like Monster Energy Yamaha and Yoshimura Suzuki have their own dedicated shop to build and prepare their team’s bikes. At the beginning of the year, sitting on the lifts at the team’s shop are two brand new motorcycles that either came off a showroom floor, or in a crate from the manufacturer. No doubt they are a work of art, but except for the KTM class, no racer is going to race a bike just as it comes from the manufacturer. That baby is going to be torn down to the frame. The engine will be sent off to the engine builder, forks sent off to the suspension builder, and the stock electronics, wheels, brakes, triple clamps, rear shock, exhaust, bodywork, controls and sometimes the tank will all be scrapped in favor of lighter, stronger, and flat out better performance parts.

The engine the motorcycle came with, and at least two other matching engines will be heavily modified to different specs. With engine builds you can control a range of different things, namely horsepower and torque. Typically, one engine is built for fast tracks, one for slower tracks, and one that’s in between. At a fast track, such as Utah Motorsports Campus near Salt Lake City, where racers can hit 200 mph on the front stretch, you need all the power you can get, since the altitude severely lessens the power engines produce. On the other end of the spectrum, at a track like Barber Motorsports Park, which doesn’t have any long straight sections, most racers would prefer a motorcycle that gets off the corner a little bit better. The top racers have engines that are all built and ready for use for each particular track type, and the engines are swapped in and out as needed.

Suspension is a bit of a different story. It’s built more with rider comfort and preference in mind. Typically, any professional racer knows the type of chassis feel they prefer. Some like the motorcycle very stiff and rigid, with a steep steering angle, and others like it a bit more plush with more trail in the front end. Personally, I like it in the middle–not too steep a steering angle, because I feel like the bike is a bit too twitchy, and not too rigid so that the bike doesn’t slide easily, and doesn’t get too upset going over any bumps.

Then there are the wheels, brakes and controls. Wheels get replaced with a lightweight version of the stock ones. The less rotating mass, the better for road racing bikes, so there are no further changes once the lighter ones go on. Brakes are chosen based on the feel the rider wants. Some like to have to pull the lever a substantial amount so the brakes engage more gradually.  Others, including me, like it so you hardly have to squeeze the lever at all, essentially giving it the feel of an instant bite.

Controls such as the clip-ons (handlebars), rear-sets (footpegs), and levers are all fully adjustable. You can move them up, down, forwards and backward to allow for that perfect positioning that’s tailored to each individual rider. A lot of riders use additions such as quarter- turn throttles so that they don’t have to twist their wrist as much when they roll on the gas.

For the electronics, although racing rules place a limit on how much you can spend, what you can do in terms of adjustments is virtually unlimited. High-end electronics allow for completely automated engine management. They can do things such as adjust the air-fuel ratio, which determines how the bike runs. They can be linked with sensors to retard ignition timing, or adjust the throttle position when it senses a loss of traction. Sophisticated electronics can also log data so you can analyze everything from throttle and brake lever position to chassis positioning.

All the above is done long before racing begins, and not just to one motorcycle, but to two. This way riders have a backup to ride in case of mechanical issues or crashes, and just to speed up the testing process.

Testing is crucial, as it not only allows the rider to get up to speed and feel comfortable on the motorcycle again, but also to get baseline settings that can be referred to at any point during the season. Typically, pre-season testing for the top pro teams takes place over a couple days at a track that they’ve privately rented out for themselves, or maybe in conjunction with some other teams so it’s more cost effective. Generally, the whole team comes to the test, along with their semi-trucks and all the equipment needed to make any changes.

If the rider and team have been together for a couple of years or more, the bike will start off with settings similar to what they had the previous year. Before they take to the track, the rider will just sit on one of their motorcycles and feel out all the control positions. Once the ideal positioning is found, they will do the same thing with their other bike. When all that is sorted, the riders gear up for their first riding session.

It’s a rarity for the bike to feel perfect the first few sessions, so the rider will come in and make the adjustments needed to at least get him/her to the point where they can start pushing the limits a bit to see where changes need to be made. It’s generally best to do as many laps as you can, and really get up to speed before making any major changes. If something feels horribly wrong, coming in to make some adjustments is justified but at this point in the year, the goal is just to do as many laps as possible.

Once a rider gets to a point where they’re within a couple seconds of their best lap times, this is where the changes start to happen. If the gearing ratio is off, that will get adjusted. If the bike dives too much under braking, they will most likely stiffen the preload of the front forks or put some stiffer springs in. If the traction control is interfering more than necessary, that will get turned down. Mechanics will make other adjustments as well so that everything stays in balance. If you do too much of one thing, it can cause another issue.

Throughout the test, and the season, detailed notes are taken to refer to at any point in time. If you can test at a track that you’ll race on later in the season, you can use your notes to pick up right where you left off, but it can also be useful for other tracks that have a similar style to them. Either way, you gain tons of useful information, get the rider back on the saddle and up to speed, and the team builds a stronger rapport in the process.

Changes at Each Track During a Race Weekend

Testing gives you a great place to start the season, but it certainly won’t be the ideal set-up for each particular track. You can make as many changes as you want during a race weekend, as long as they follow the championship’s rulebook. Here are some of the different changes that are made throughout a race round:

Gearing: This is critical, and in my experience, is something that is messed with all weekend due to track conditions changing and increased speed. The goal is always to find that perfect gear for accelerating out of every corner and the straightaways, yet not having to shift gears too much. Most times you have to sacrifice something, so deciding where on the track it will hurt you the least can be a tricky decision. There have been instances in my career where I’ve made a bad decision with gearing and it cost me a better race result.

Chassis: The chassis and suspension are generally what’s changed the most from weekend to weekend. Again, trying to find that perfect balance from front to back is the goal, but there are seemingly an infinite amount of ways to get there. There are massive chassis adjustments which include different triple clamps and shock links, which are only done once you’ve run out of the smaller alterations such as changing springs and dampening. You also can move the forks up and down in the triple clamps, and sometimes a few millimeters one way or the other is all it takes to get it perfect.

The tracks that are the most difficult to set a bike up for are the ones with a substantial amount of elevation change, like Road Atlanta for example. The idea is always simple: A stable bike that’s not too difficult to turn, absorbs bumps well and allows for maximum tire grip. At Road Atlanta, there are sections that are fast, others slow, some fast switchbacks and loads of ups and downs. Just like gearing, you usually will have to give up something. Making the right decision can make or break your race.

Electronics and Engine Management: The engine management system is the segment that gets messed up all weekend long, again in search of the ideal balance. My last race bike in 2015 didn’t have any traction control, but I did mess with things like engine braking. For example, at Road Atlanta, there are a wide variety of corners and elevation changes. In some places, such as the steep downhill before the last corner, you want more engine braking. On turn one though, you want the bike to feel like it rolls more with less engine interference. So, I also made changes to how quickly the throttle picked up when I rolled on the gas.

Traction control also depends heavily on the track and conditions that day. Some riders prefer a lot, while others none at all, but when it’s working properly it’s advantage can be quantified to a second or two per lap. It’s easy to let the TC interfere, so most riders have it turned down quite a bit when conditions are dry but it’s a completely different story when it’s wet —it gets turned up… A LOT! With electronics, you can easily adjust as a rider if it’s not quite right. It may hinder you a bit, but it won’t make or break your race unless something is horribly wrong.

The key to finding the perfect race bike is keeping balance on all fronts. Between the ears is what makes a true champion, but having the best bike possible underneath them is what makes championships possible.