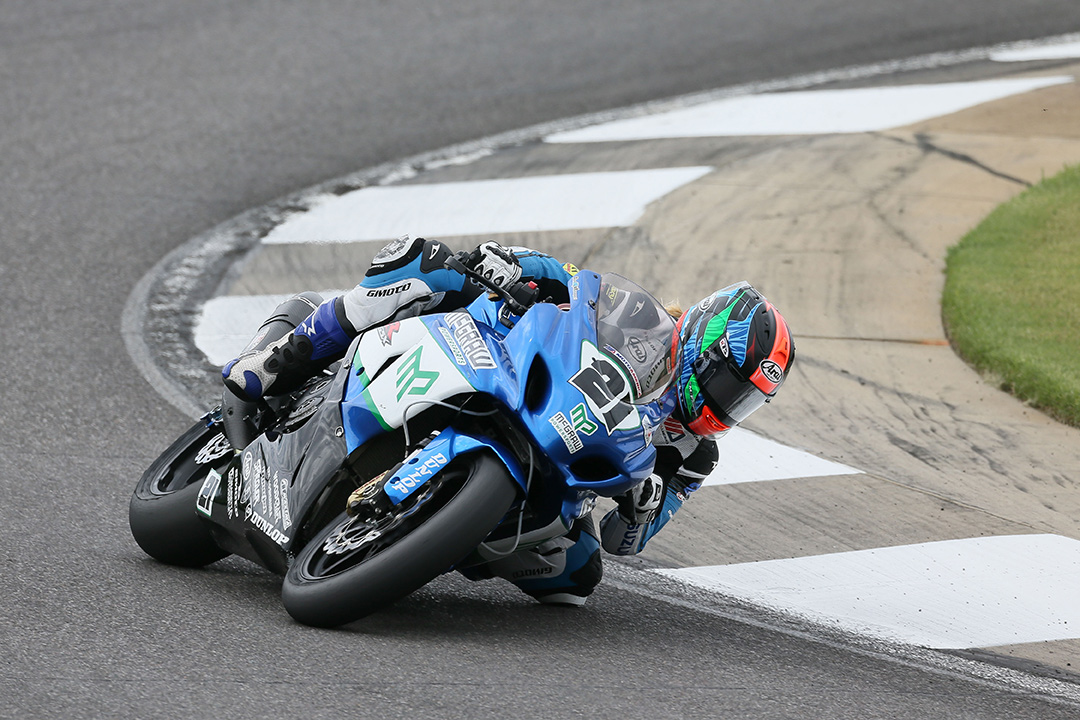 I FOUND MYSELF TOWARDS THE FRONT OF RACES, INSTEAD OF THE BACK, AND SLOWLY BUT SURELY I STARTED WINNING RACES AGAINST ALL THE BOYS.

Fifteen years sure goes by in a hurry, doesn’t it? Looking back on my first career, I find myself smiling at all the wonderful memories and glorious victories. I am just in my early 20’s, and I’ve already seen a lot of beautiful places, met a lot of incredible people, and have experienced the thrill of victory and the heartbreak of defeat. I’ve done things most thought impossible, including running my own business. I have broken the mold and made history.

Now that I’ve got you curious, I’d like to formally introduce myself, so it here goes. Hello everyone, my name is Elena Myers Court. I’m a former professional motorcycle superbike racer, a career I embarked on when I was just eight years old. That career ended, or I hope, was put on hold at the end of the 2015 racing season.

For those who don’t know what superbike racing is, it’s racing of consumer-like street bikes, such as my bike, a Suzuki GSX-R1000, on a closed circuit such as Laguna Seca in Monterey, CA.

This hobby – turned – professional career started with my dad introducing me to motorcycles. As an ex-racer himself, he thought it would be an absolute blast to be able to share his love of motorcycles with me. It started with two pocket bikes, which are basically mini versions of the full-size sportbikes you see riding on the street.

At first it was something fun we could enjoy participating in together, as well as spend time together on the drives to and from the track. As I learned and grew as a rider and racer, slowly it became my primary focus (besides getting straight A’s in school, of course). I would practice at our local go-kart track in Stockton, CA, every Monday after school, and race 10-12 times each summer at tracks all around California.

Being the competitive person that I’ve always been, I found myself getting somewhat discouraged in the beginning when I wasn’t doing as well as I thought I should be. Although I was the only girl racing against all the boys, I felt that I had it in me to do better. I knew I was capable of being as good as they were, but something hadn’t clicked yet.

Shortly after that realization, and out of nowhere really, a light bulb turned on and everything I had learned up to that point finally came together. I gained confidence in going faster in the corners, so my speed really went up. My lap times dropped drastically. I found myself towards the front of races, instead of the back, and slowly but surely I started winning races against all the boys (and men!). Before I knew it I was winning national amateur races, writing an article for a motorcycle industry magazine, and looking at a career as a professional in the AMA (American Motorcyclist Association), America’s premier racing series.

In 2010, at age 16, I went on to win a race in my professional rookie season. Riding on a Suzuki GSX-R600 at my home track in Sonoma, CA, I became the first and still the only woman in AMA Pro history to win a national roadracing event.

Two years later, riding the latest Suzuki GSX-R600, I won my second professional race at Daytona International Speedway, making me the only woman to ever win a professional motorsports event of any kind at the world-renowned circuit.

In 2013 and 2014, I raced the Daytona 675R for the Triumph Motorcycles factory team and had some more success by finishing 9th in the prestigious Daytona 200, which made me the highest finishing woman in that race’s 70-year history.

By 2015, I felt I was ready to make a switch up to the powerful Suzuki GSX-R1000, but the only way I could do it was to run the team myself. At the time there wasn’t any support available from the bigger teams, so with the backing of McGraw Powersports, that dream was set into motion. We had a very successful season, finishing 5th in the series’ most prestigious class, Superbike.

After the 2015 season, a number of things happened, including my engagement and marriage to a crazy Isle of Man racer named Dean Court. Changes and uncertainty with the race series led to funding issues, and I was not able to continue racing in 2016. Having the great relationship that I did with McGraw Powersports led me to what is my current full-time position as the Northwest Territory Regional Sales Manager for Western Service Contracts, the company’s powersports extended protection business.

Although my life has changed drastically, I really enjoy what I do and the people I work with. I travel all throughout Northern California in my brand new pick-up truck, and fly to Oregon, Idaho, Montana, and Wyoming to visit and service existing dealers who use our products, as well as on-board new dealerships.

Working for a company that’s been in the business for 30 years certainly makes my job a bit easier out in the field and the competition out there these days can be quite tough, but that’s why I’m here. My competitive bone will never go away and I won’t give up until the job gets done.

I’m here to share some of my motorcycle knowledge and experience not just with our dealers but with everyone out there in the world wide web who loves riding as much as I do. If you have a topic you’d like me to cover, or a really in-depth question you’d like me to answer, I’d love for you to reach out! Please like the McGrawPowersports Facebook page and send a direct message with your topic or question. At the end of the day, I just want to give back to the community that’s given me so much. Until next time my friends . .