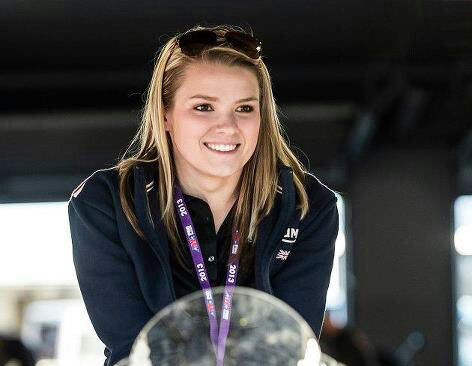 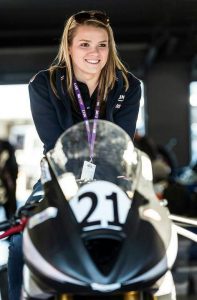 Between races, Elena relaxes with her team in the garage

Some my life’s greatest moments so far are those I spent on a motorcycle. Just me and the machine. The adrenaline, the speed, the sense of freedom – that’s what I lived for. Every second on a bike was filled with that rush. Whether you’re a weekend warrior, motocrosser, beginning street rider, or a serious competitor, as I was, I’m sure you’ll be able to relate.But it’s not all smooth, open highway. Any rider who becomes a competitor in the sport of motorcycle road racing can tell you they have experienced some bumps in the road, whether it be the sacrifices they’ve made, persevering after they’ve experienced an all time low, or having the courage to try again after failing or falling. What I’ve learned through this journey to becoming a successful racer is that nothing ever comes easy and you have to fight for what you want and what you believe in. These are the lessons that will stick with me throughout my lifetime.

Lesson 1: Nothing great in this life comes by chance or raw talent. It takes hard work, dedication and determination. From an early age I learned that to be good at something, and to accomplish your goals, you need to remain patient and focused. When I started racing, I practiced every single Monday, rain or shine, at the local go-kart track in Stockton, California. There were days I crashed several times, and there were others that I beat my personal lap-record. I trained hard physically for 8 years in a row, and there were some days that I hated every minute of it. But, I knew that’s what it would take to reach my goals, so I did it. Sometimes you have to take the bad with the good, but if you are determined to keep getting better, you will.

Lesson 2: You’ll never regret the sacrifices you made for something you truly desire. It may seem like you’re giving up so many things, and so much time, but it’s more than worth it. I gave up going to regular high school and opted for home schooling to allow me to travel the country racing motorcycles. My social life was dismal throughout my teenage years. I struggled to maintain friendships and relationships with people at home. The only friends I had at times were my racing competitors who lived on the other side of the country. It wasn’t easy, but the joy I had competing on a motorcycle far outweighed any of the sacrifices I had to make. Sometimes that isn’t always the case, but if you can see your future being a byproduct of sacrifice and hard work, just keep focused and you will reap the benefits.

Lesson 3: Although the end goal may seem the most rewarding, sometimes the journey is the most satisfying. The experiences, the relationships you build, the community you become a part of, all those things give your process so much meaning. Looking back on my racing career, I am proud of my accomplishments, but I smile more at the little things that I did. The road trips with my family, bar-banging races, pulling wheelies, having that perfect slide in and out of a corner, that’s what I remember. The race wins were a culmination of all the little things coming together, and although that feeling was the best in the world, that’s not the part that made me who I am. Last season, in 2015, I had a pretty dang good year. I finished fifth in the nation’s most prestigious class, yet I look back on that year and what comes to mind are moments that were funny, stressful and unpleasant – those are what I value the most. I took responsibility for so many things; I learned so much and those moments are irreplaceable as I move forward with the rest of my life and everything that comes next synthroid online.

Lesson 4: Have the courage to do something nobody else has done before and to defy the odds. This is the greatest thing I’ve learned in my racing career. There are going to be people who want to see you fail, who say you can’t succeed, who will say something nasty to get under your skin. And this isn’t just through the early stages either. When I was just nine years old, a grown woman told me that a female could never be successful in this sport, and although it made me quite upset at the time, I had the fire in me to prove her wrong, and I did. Up until my last year racing, I still heard comments about how my wins were just flukes and I would never amount to anything in the racing world. The biggest thing I’ve taken from that is to be strong, have faith in myself and the courage to continue on with doing something nobody has really done before.

I think the most important lesson to be learned in life is how to become the best version of yourself. That means doing things you don’t enjoy, things that push you out of your comfort zone, things you have to make sacrifices for. It means ignoring the people who are eager to tell you what you can’t do, and listening to the people that believe in what you can do. And most of all, you have to listen to your own heart and believe in your ability to write your own story. Sometimes that’s the best way to find out who you really are. I learned that lesson riding a motorcycle, and I wouldn’t have it any other way.