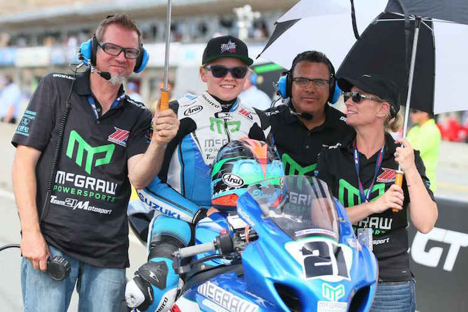 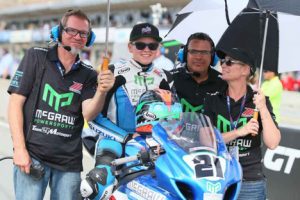 My dad holding the umbrella on the left, while my mom holding the other on the right. My mechanic, Carlos Neves, was the photo bomb.

In every person’s life, there is always someone who has an outsized impact on you. Typically, they’re the one who supports and guides you through thick and thin. They’re your best cheerleader, and toughest critic. They see more in you than you may see in yourself. This person has been part of my life and career for over two decades, and is the man I’m proud to call my father.

From an early age, I had a very special bond with my dad. He’s sort of a jack of all trades, and a very talented one at that. He had a passion for art, music, surfing, golf, motorsports and more. He wanted to share some of those things with me so he taught me how to play golf at age three, ride bicycles at age five and then ride motorcycles at age seven.

It was a learning experience for both of us. Like any child learning how to do something new, I stumbled and fell and got up and dusted myself off over and over again. My learning curve was steep, and so was the learning curve for dad, and mom too. How could they know what to do, what the best approach is, if they’re doing things the right way? Every kid is different, and finding that balance where you’re helping them and pushing them to grow, yet not being so harsh as to make it unenjoyable has got to be a big challenge.

In my opinion, both of my parents did an exceptional job in figuring out how to raise a kid who ultimately went on to do things no other girl had done. I can only imagine the struggle for them as they tried to figure out what to do with me. There was really no road map for kids in my sport, let alone a female. I would have to overcome hurdles that boys wouldn’t have to, and at times that was a tough journey for all of us.

In the beginning, riding a motorcycle was just a fun hobby for me. I mostly rode in empty parking lots. My mom wasn’t a big fan of me riding at first so she didn’t come along much, but it was alright because it was a special time to enjoy a sport with my dad. He taught me the basics of how to handle a motorcycle–the throttle and brakes at first, then how to go through a corner dragging my knee. We went over how to choose and follow lines, and he drilled it into my head that being smooth on the controls is one of the most important things I could ever do. Eventually I got on a bigger bike with a clutch and gears, and he taught me how to use those too.

During those formative years, he picked me up off the ground more times than I’m sure he ever wanted to, but got me right back in the saddle to keep going. In fact, it was a rule of his never to go home after a fall, but always to get back on the bike and ride a bit. I’m sure these times were trying and patience had run thin, but in that initial learning curve he was nothing but supportive and helpful.

In my first few years riding, I also learned how to ride a bit in different disciplines of racing, including flat track, an all dirt track with no jumps, and supermoto, which was mostly an asphalt course but had a dirt section with jumps. I wasn’t very comfortable with the bike moving around like it did in the dirt, so he would take me to the track early in the morning before anyone else would be out and just have me practice riding in the dirt or gravel section. I needed to get used to sliding my motorcycle if I ever wanted to be successful in any type of racing. Although I hated it at the time, it was one of the best things for me.

Fast forward to 2003 to an amateur national supermoto race in Las Vegas, Nevada. At this point I was far from comfortable doing jumps or really any supermoto for that matter but it was my 10th birthday weekend and I wanted to go and compete with all my racing friends.

In hindsight, this was probably not the best idea. The weather was miserable all weekend –the temperature was in the thirties and I was up against jumps far bigger than I’d ever been over. I was incredibly uncomfortable in the dirt sections, so I just rolled over the big jumps, and had very little feel for grip on the asphalt. All these factors led to me crashing about eight times over the course of the weekend. By the end of it, I was sore, tired, and an emotional mess. My dad was visibly frustrated with me and at the end of the weekend he said we should just sell my bikes and forget this whole racing thing. I passively agreed.

After he spoke with another father of a racing family, he was convinced that I had just had a bad weekend and there was no need of any talk like that. I think he also came to the realization that that was no way to handle the situation, and he came to me later and profusely apologized to me and came forward about how wrong he was to ever say that. I was quite upset at the thought of not racing, so it was a relief to hear those words come from him. He always had a humble way of coming forward when he was wrong and I knew that when he said that maybe we should sell the bikes that he didn’t mean it. This was the last time words of doubt like that came from his mouth.

What we both concluded, after this event, was that supermoto just wasn’t for me and that road racing was what I seemed to take best to. Looking back, I just wasn’t prepared for the event. I had virtually no jumping skills, little ability to control the bike, and no understanding of grip. In all honesty, I was still a newbie. We both shared a valuable lesson in that weekend, and that was to not be so quick to throw in the towel and have more faith. One bad weekend shouldn’t shape your whole career.

I continued to keep road racing and with guidance and patience from my dad, I gradually improved to the point where I was beating kids that had previously whooped my butt.

License to race with the bigger dogs

One memory that really stands out is when dad took me up to Portland International Raceway in June of 2005. He had spoken with the president of the racing club, OMRRA, about having me come and try to get my big track road race license on my Honda RS125. I was 11 at the time, an age where no other club in the country would even consider having a kid race with them. They hesitantly consented, with the condition that I did all the prerequisites they required, including their novice school.

My whole family drove up to Portland and I participated in their novice school on Friday afternoon before the race weekend. I passed it with no problem, and we were told that if I wanted to get my expert license, which typically it takes at least a few races to get, then I would also have to put in six hours of volunteer work at the track.

Well, since I wouldn’t be doing any volunteer work on track by myself, my dad came with me and we helped with corner work during the vintage races on Saturday afternoon. Corner workers are responsible to wave the flags to signal a variety of messages to the riders on course, and notify race control if someone crashes or if their bike breaks. As boring as it was to watch the riders go by, it was a nice bonding time with my dad as we watched the other riders and pointed out what they did well, and talked about how I could apply that to my own riding.

I went on to win the 125 race that weekend, beating all the novices and experts, and was awarded my expert license at the award ceremony. That was a super proud moment for my father. It was also a defining moment, because on that day I had surpassed his speed on a road race course.

Even with that being said, he still continued to help me improve beyond his own skill. He was very good at analyzing what the competition was better at, and would relay the information to me and how I could apply it to my own riding. We carried on this way for a few years until I had riding coaches and at that point he passed the torch to them. He still took me to all the races and served as my mechanic until I turned professional. At that point he traveled with me to see my mechanics, and helped with the wrench when it was needed.

Mom stepped up her involvement too. When I was younger, my mom typically stayed in the background helping with things as she could. When I got to the big leagues, she took on a new role and helped support me in ways I didn’t even know I needed. She booked travel arrangements, and kept on top of me with what I needed to do at home and was a steady source of moral support as I navigated a whole new set of challenges that went beyond riding.

To say that the first few years as a pro had its ups and downs would be an understatement. I had several broken bones, two wins and a podium, and some downright poor performances in there as well. There were times when I wanted to quit but they always pulled me up by my bootstraps and helped me get back into a better state of mind. After all, it was difficult learning how to be a professional while all my friends from school were still being kids.

Throughout my career, I feel really thankful to have two parents who supported me unconditionally throughout it all, for without them my racing journey would have been entirely different, perhaps non-existent. I think there’s really something to be said about a parent/child relationship that continues to stay strong through not only the victories, but the hardships as well. And to come out on the other side of it all with nothing but smiles and good memories, well, what more could you ask for?

On a final note, I want to thank each and every one of you for taking the time to read my stories, tips, interviews and reviews. This entry marks my twenty first blog, and I feel like it’s time to move on to something different, something bigger. Stay tuned for more. Farewell for now.