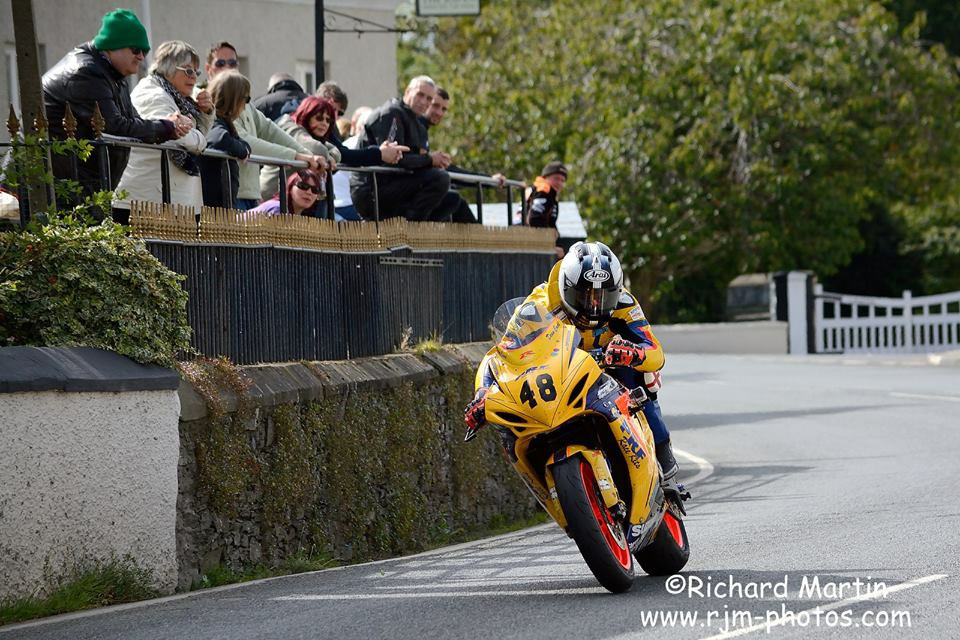 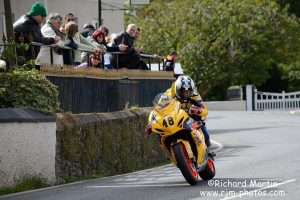 Yeah, this is Dean. He’s just past Ballaugh Bridge between the 17th and 18th milestone on his Suzuki GSX-R 600.

The 2017 Isle of Man Tourist Trophy kicked off earlier this week, and runs through June 9. Coming up as a racer, for years I heard about this race, and how ridiculous it was: Six laps on a 37.73 mile loop over mountainous terrain; 264 corners to remember; innumerable walls to hit, cliffs to fly off of . . . no wonder there have been 250 recorded deaths–an average of about two a year–in the course’s 110 year history. Let that sink in for a minute.

This was crazy to me!

That may sound strange coming from someone who made a career of racing at 180mph, but I only raced on closed courses with run-off areas, air fence barriers and a host of other safety measures that make these courses relatively safe for riders.

The IOM TT is a different animal entirely. This course is almost entirely made up of public roads traversing a tiny little island in the Irish Sea between England and Ireland. I’m not talking about highways. Imagine going through ancient villages and bucolic neighborhoods at speeds of 180+ mph, inches from brick walls, dodging curbs, trees, bumps and slower riders. The death of one or more riders is all but certain. What kind of lunatic would ride in this race, I wondered? How on earth does the rider’s family manage the stress?

I found out in 2014 when a British motorcycle rider named Dean Court sent me a Facebook friend request. Dean knew me a bit from my racing background but I didn’t know a whole lot about him. I don’t normally accept friend requests from strangers, but we had a mutual friend who raced in the IOM TT so I accepted.

We quickly got to talking about motorcycles, since it’s what we had in common, and he divulged to me that he was planning on racing in the 2015 Manx GP. This is an amateur and vintage motorcycle event held in late August or early September on the same course that the TT runs on. It allows up-and-comers to get experience on the course before mixing it up with the pros.  Dean had been preparing for it for the past three years.

“I went over to the TT in 2011 to watch it for the first time, and was completely blown away,” he told me. “My first memory of watching the competitors was while I was sat on a wall on the outside of a turn called Gorse Lea. The wall is on the exit of a corner where the riders go flying past you at 160 mph, only inches away. I knew instantly this is what I wanted to do.”

“I was there for eight days and during that trip I clocked over 1300 miles and wore out a set of tires riding around the course. As soon as I got home, all I could think about was what I had to do to be able to race over there.”

My first response was along the lines of, “Are you freakin’ nuts?” As we talked more about it over the next several months, I could tell this was something he was really passionate about so I told him I would come watch and support his efforts over there. Maybe it wouldn’t be so bad.

You say eerie, I say terrifying

“The atmosphere is unlike any other race I’ve ever been to. It’s definitely the most exciting but has an element of being a bit eerie,” says Dean. “Everyone seems to make sure to say ‘good luck’ and ‘see you in a bit’. It’s given me the worst nerves I’ve ever had.”

“And then it changes as soon as the starter taps you on the shoulder. By the time you get to the top of Bray Hill, all your nerves and worries are long gone. With the course being so long, your focus is all about being smooth and hitting the marks that you’ve memorized throughout training and practicing. It feels like a really fast Sunday ride.”

That’s Dean’s experience from behind the windscreen. The experience on the ground was a lot different.

What Dean calls eerie, I call pure terror. Dean drove me on several laps around the course and I could see with my own eyes how dangerous it actually was. From the moment the first session began, I knew this wasn’t something I wanted to be a part of. By this time I had fallen for Dean, and here I was, watching the man I love compete at a place that made me cringe.

Watching the race–or rather not being able to watch it–was excruciating. The communication on the island is horrible. You can use a radio to hear race control, but it doesn’t update you on much other than some lap times.

You can also watch the split times on your phone, which only picks up the transponder 5 times each lap. This means you only know every 4 or so minutes when someone has crossed into the next segment. Other than that you wait about 20 minutes to see if your rider has come around or not. Those 20 minutes intervals were the most agonizing of my life.

Luckily, Dean didn’t have any issues or hiccups that caused a delay in him getting back to the pits during the time I was there. With a race of my own coming up, I couldn’t stay for the entire event but I timed it so I could stay for one race, and figured I could watch the other race from live timing at home. The weather ended up messing with those plans, delaying his first race to the day I was flying home. I couldn’t reschedule but thought I would get the in-flight internet while the race was going on.

Turns out the Wi-Fi wasn’t working on that plane, so I spent the flight on the verge of tears, praying that there would be a text from him when I landed. I had confidence in his riding and bike preparation, but on a course like this there are so many other factors that come into play.  Those other factors made me very nervous.

I think this was a big realization, and a turning point in our relationship because in that moment I knew how much he meant to me and I couldn’t bear the idea of anything happening to him. As we touched ground on U.S. soil, my phone went off. Everything went great and he was safe. I was so happy.

Unfortunately, some others weren’t so lucky. Several people broke bones, and destroyed bikes, but worst of all, there were two deaths over the course of the event, one during the first few practice days when I was there.

As a motorcycle racer, the possibility of death is always something you have in the back of your mind, and it surfaces occasionally when you hear of or witness a fatality. It’s a big reality check, but as racers we all continue on our path because it’s what we love. It’s one thing to run the risk of a rare incident, but seems entirely different when these men and women go out on track knowing that one little mistake could be their last. Why risk it all when you can race just as fast on closed circuit?

I will say that living with the possibility of death does have the effect of bringing what matters in life–and who–into sharp focus. After my harrowing experience, I knew I wanted to be with Dean, and I guess I can thank the IOM TT for that. We were engaged by November and married in January 2016. I asked Dean if his nerves were worse when we got married, or at that race. His response: “Yeah, you know I was nervous when we got married but this was different.”

For a certain breed of people, the IOM TT is the most thrilling race in the world because it tests mind, body, and soul. To stay focused and strong for a week of practice, and then to race for 6 laps (over 200 miles) facing known dangers and the possibility of death makes this more of an extreme sport than the kind of racing I did. I’ve always thought those people were out of their minds.

Dean still wants to race there again, but he says he’d never want me to race there, so I think he understands how I feel. Some of us may never get it, or even try to understand why people would do such a thing, but for others it’s their entire world. It’s what they live and breathe for. Maybe people like that are the ones who live the best life here on earth. Or maybe they’re just lunatics. Either way I think I’m stuck with the latter for the rest of my years here.