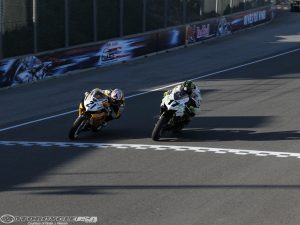 Exiting turn 11 and heading for the checkers next to James Rispoli. I beat him that day.

One of the things I mastered during my racing career is figuring out the fastest way to get around any given track. This is not just a matter of going as fast as you possibly can. Anyone can hold the throttle wide open going in a straight line. You have to know how to be on the right path through the corners.

Corners are where you have opportunity to gain ground on the competition. How you handle the corners is what makes the difference between winning and losing, qualifying or not, or turning in a record-breaking performance versus a merely average one. So, when sizing up a particular course and figuring out the fastest way around, it’s all about the corners.

I’ll illustrate by letting you in on my cornering strategy for Laguna Seca, my favorite track and the next stop for this year’s MotoAmerica series. But first, let me give you a quick primer on corners.

There are three basic types of corners. Entry corners have more straightaway coming into them than coming out. These are where the most crashes happen because everyone’s hard on the brakes. That means there’s an opportunity to gain ground, but you have to be careful. Finding the edge of the limit on the front tire is harder than it is with your back tire, and when you’re braking and adding lean angle, it gets even harder.

Everyone’s slow in the slow corners so in the grand scheme of things, rushing your entry into a tight, 180-degree corner won’t get you far compared to being full throttle for longer in a fast, wide kink. Managing entry corners is a question of risk vs. reward.

Exit corners are the opposite–there’s a lot more straightaway coming off the corner. Exit corners are more important than entry corners, because on any race track, you’ll be on the throttle more than the brakes. The most important corner is the exit corner before the longest straightaway. Maximizing this and the other exit corners will ultimately leave you with the fastest lap times.

Balanced corners have roughly the same amount of straightaway coming and going, and they’re normally treated as exit corners.

The basic approach to all three types of corners is to find the straightest line through so you can stay on the gas as long as possible going in, and twist the throttle wide open at the earliest possible moment coming out. To do that, you enter at the outside edge of the track, lean over towards the corner when you hit your reference point and, when you hit the apex, draw a straight line from apex to outside and that’s your exit line. Simple, right?

But, every corner has its own complex geometry of radius, camber, slope, track width, and rider lean angle. Speed and the moves of other riders change the equation. By simply looking at a map of a given course, you can have a dang good idea of what you need to do on each corner, but you can’t really figure out how fast you can go until you ride the track a few times and feel the surface beneath you and find your reference points. Every curve is an exercise in trying to find the limits of track, bike, and self. That’s why you see top-level racers fall so often. It’s not that they’re bad riders, it’s that they’re always looking for those limits.

What makes Laguna such a tough course is that opportunities to ride there are few and far between. Not only is the rental cost high (over $25k for a day) but there is a tight limit on how many riders can be on track at one time, and on how loud their motorcycles can be (92 decibels — crazy low). This makes it difficult to get any sort of seat time in to learn the track or test your machinery. For a lot of riders, a race weekend is their very first time on course.

I consider Laguna my home course, and I only had a handful of opportunities to ride there before I turned pro. During those few times I got to ride on the circuit, I took full advantage of every second. I did all the sessions I could and took as many notes as possible. Having to learn Laguna that way influenced my approach to learning other tracks later in my career.

Laguna is an amazing track, with the smoothest surface, an incredible configuration with a variety of different corners, and really engaged fans. Once a home to MotoGP and current home to the World Superbike championships, it enjoys a level of prestige that few tracks in the US can claim. Here is your turn by turn guide to all the Laguna racing action. 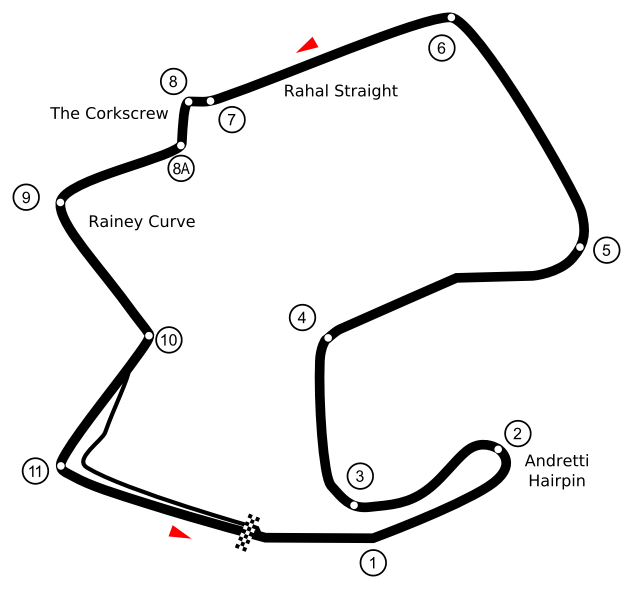 Turn 1: The way I approach this turn, which some consider not a turn at all, is a bit different than your standard corner. Although you can’t tell on the map, the apex (the closest you get to the inside edge of the track in each corner) of this turn is the peak of the elevation on this part of the track. Although your line will be the same, you’ll really have to pick up on some reference points–bumps, lines, color variations or landmarks–to guide you through. The reference point I always used was the right side of the foot bridge that goes over the track here. I wanted to be leaned at a certain angle by the time I went underneath it.

The part where you’re leaned over the most is completely blind when you’re approaching it. This turn’s radius is more like a kink, so on a 600 you should be flat-out. It takes some serious cojones to do it, especially if you don’t have your reference points down. These elements of difficulty make this turn my all-time favorite in the country.

Turn 2: This is the number one corner for passes on the course, making it a great place to spectate. There’s a mega-straightaway leading in, so your entry here will be the most important part of the corner. You want to maximize your entry speed, yet not go too wide and completely kill your exit. Finding the balance here is something I’ve struggled with. I finally realized it’s best not to go in there hair on fire and give up on the rest of it. As a reference point, I use the red and white striped curbings, aiming for being parallel with the second curbing on the inside when exiting.

Turns 3 and 4: These look like a pair of pretty basic right-hand corners, but that couldn’t be further from the truth.

Turn three is a decreasing radius corner, and quite balanced in terms of entry and exit so I  always treated it as an exit corner, because that’s a safer and more repeatable approach. The entry is also quite tricky because there’s zero elevation on this part of the course and it’s really hard to see the inside of the corner. You’re going to be lost here without reference points.

Mine was midway through the curbing on the outside of the track, where there’s a certain point where I’d start my turn in. The key to this turn is to stay parallel with the inside curbing so you can get on the throttle as early as possible as you exit.

Turn 4 is similar to turn 3, but since it opens up on the exit to a straightaway, it’s considered an exit corner. This turn is also flat and deceiving because you don’t see how much it opens up on the exit until you’re already there. For the first few laps I ride at Laguna each year, I go through here and I feel like I could’ve gone a little bit faster if I hadn’t left so much extra room on the outside of the track. Then I could have got on the gas sooner.

Turns 5 and 6: These are similar in that they are both left hand exit corners, but that’s about all you can learn from the course map. Turn 5 is uphill and has a positive camber so it is kind of banked. Turn 6 is also uphill, and has a massive dip in the middle of it.

Neither of these situations change your line, but it does change your entry into them. Any time you’re going uphill, you can go a little faster on the entry. Basic physics says you’re already going to start slowing down, without getting on the brakes, so you can get in there much quicker than you think. The first couple of laps everyone sees a certain radius and they slow down more than they have to. It takes a couple of laps to get used to it, even if you’ve ridden there before.

Turns 7, 8 and 8A (The Corkscrew): Ah! The world-famous corkscrew! This truly is a one-of-a kind corner and although it seems scary due to the quick three-story drop in elevation, it’s actually quite simple in terms of lines. The entry to it is really fast, at least 140 mph, as you head up the hill from turn 6. I always aim for the left hand curbing and try to brake right where the curbing starts.

Since there’s no exit for turns 7 and 8, they would both be considered entry corners. You want to put a high level of emphasis on how you go in here, because it’s a place where it’s easy to get passed. There’s really only one line through here and that’s going straight through the middle of 7 and 8, setting up the entrance of 8 on the right-hand side of the track for a straight shot down the back side.

As you tip in to the left for turn 8, you’ll want to hold your lean angle a little longer than you might think, so that when you flip it over for 8A, your trajectory isn’t heading off the inside of the track. Believe me – I’ve done it!

This is also a great spot for spectating. It’s pretty exciting to watch the racers drop over three stories at speeds of over 50 miles per hour!

Turn 9 and 10: This set of corners are my second two favorites on course, and in the country. They are both downhill, incredibly fast and have a very cool camber to them, unlike any other corners I’ve raced on before. They are both also considered balanced corners but I treat them as exits. The entries to both are really fast, but it’s very easy to get in a little too hot since you are headed downhill. I like to approach these turns by getting on the brakes a little sooner than I think, but not too hard so it allows for some adjustability until you can get it just right.

Exiting turn 10 is crucial, as it leads into the last corner, where your braking can break your race.

Turn 11: The last corner is considered an exit corner so your goal is to get in as quick as you can, but be sure to not get in too hot and blow your exit. If you can get out of here better than your competition, you’ll have an opportunity to either beat them to the finish line, or give you the advantage to out-brake, and pass them going into turn 2. Since it’s the last corner on track it’s always one of the best places to watch as racers try their final move to get by their competitors.

I’m looking forward to being out at the track with for race weekend July 7-9. I still feel a little wistful watching rather than riding at my favorite track, but I expect to see some great racing. I’ll be with McGraw and Western Service Contracts at the truck in the Meen Motorsports paddock, and in the infield booth in the vendor area, so come on by and say hey