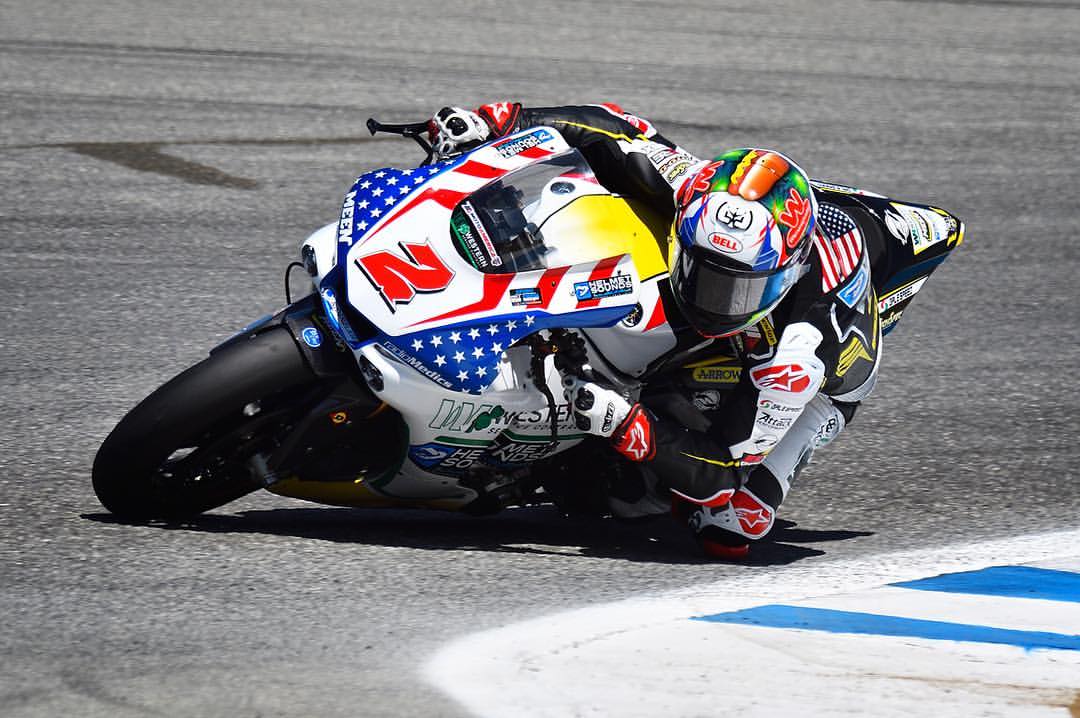 World Superbike returned to Laguna Seca last weekend, and with record numbers of fans attending, it’s safe to say that the races this past weekend were a hit! The combined MotoAmerica/WSBK event drew 64,298 people over three days, counting yours truly. By comparison, this same event drew just over 41,000 people in 2013. I’d say we’re on the right track to see an upswing of the sport in the states.

I attended the event as an employee of Western Service Contract, and got to hang out in the paddock suite above the garages and meet with some of our dealers and fans. The weather was superb, and I saw some fantastic racing across all classes, and for the first time in a long time I enjoyed myself at the track without participating in the event.

This is not to say I wouldn’t enjoy riding more, but the vibe I got from the fans and the riders made it different than other races I’ve been at over the past couple years. This was the first American World Superbike race since the great Nicky Hayden’s passing. There were tributes to Nicky both on and off the track, and it was great to see everyone come together as a community to support his family and the series.

What is World Superbike? This championship is essentially MotoAmerica on steroids. Racers ride top-of-the-line production-based motorcycles with every little goodie you could imagine on them. As the name implies, riders and teams are world-class. This is the series that all national riders aspire to race in some day. It travels all over the world throughout the course of the year, and Laguna has been one of their stops on and off over the past several decades. It was here that Nicky won his first MotoGP race in 2005, so it was a fitting site to pay him tribute.

Our paddock suite was right above the factory Ducati team’s garage, so we got to watch WSBK stars Chaz Davies and Marco Melandri come in and out of their pit, and was that a sight. These guys always blow me away with the level of professionalism of the team members and riders, and the workmanship and quality of their equipment. Even though I’ve been around the sport for a decade and a half, world-level teams still get me excited. It was my dream as a kid to race at the world level, so having a bird’s eye view to catch glimpses of their world reignited that spark.

As always, the track at Laguna produced some exciting racing, and qualifying sessions. World Superbike’s Superpole–their cut-throat final qualifying session–was wicked as always. In the last few minutes everyone threw down their fastest lap time of the weekend, and positions changed more than a dozen times before the session came to an end. The two Kawasakis–Tom Sykes and Jonathan Rea–took first and second separated by less than .01 second. Welshman Chaz Davies took third to round out the front row.

WSBK Race One on Saturday afternoon did not disappoint, with Davies taking the win, less than three weeks after breaking his neck in an accident in the last race at Misano. It was certainly an outstanding performance from him. Rea followed in second position, 1.2 seconds behind. Sykes ended up 4.5 seconds back from Rea and the rest of the field came 12 seconds after Sykes.

WSBK Race Two was exciting in the beginning, but turned into a bit of a yawner. Jonathan Rea checked out from Tom Sykes while putting up a new race lap record, and Chaz Davies spent most of the race making up for a poor start. Rea, Sykes and Davies went 1-2-3, each separated by two-plus seconds at the checkers, with the rest of the field following 17 seconds back from Rea.

Probably the most impressive moment in World Superbike was watching Jake Gagne ride Nicky Hayden’s bike for the factory Red Bull Honda WSBK team for the American round of the championship. Jake has been riding for the Broaster Chicken Honda team in MotoAmerica Superbike, but was asked to ride in WSBK here as a tribute to Nicky.

I know how different the world-level bikes are compared to our national bikes, but Jake seemed to take to the Red Bull CBR1000RR very well, and ended the weekend with two 15th-place finishes, with Nicky’s family among those cheering him on. Nicky’s passing has been incredibly difficult for our community. I can only imagine the level of emotion in the garage over the three days, so kudos to everyone who made that possible.

Anyone who watched the MotoAmerica races over the weekend got more than got their money’s worth! Superpole for Superbike / Superbike 1000 was tight, with less than .5 seconds separating the top five. Josh Herrin aboard the Western Service Contract YZF-R1 stirred up the pot with the factory riders and put himself in 4th ahead of the current class champion, Cameron Beaubier. Roger Hayden, Josh Hayes and Toni Elias formed the front row and Superstock 1000 rider Mathew Scholtz rounded out the second row next to Beaubier.

Race One was a nailbiter. Off the start, Hayden, Elias and Hayes got away at the front, while Beaubier had a moment in turn 2 which he spent the whole race trying to recover from. The front runners were all battling hard when unfortunately, Hayes crashed in turn 6 before heading up the hill to the corkscrew. From there the two Suzukis battled hard until the end when Elias edged out Hayden by just over half a second at the finish line. Beaubier crossed the line to take third in Superbike, and Mathew Scholtz crossed in fourth to take the Superstock 1000 win over two seconds ahead of Anthony West and Jake Lewis.

Race Two seemed to almost mirror race one, as it was filled with hard passes, close racing, and a few unfortunate crashes. The two Suzukis of Hayden and Elias had a flying start, as did Beaubier and Hayes. Mid-way through the race Hayes dropped off the lead group and left Cameron Beaubier to represent the Yamaha team amongst the other two factory bikes.

Meanwhile, Josh Herrin also got past Josh Hayes and put himself into fourth position. With less than 12 laps to go, Beaubier took a bit wider line through turn 9 to get a run on Hayden into turn 10, when suddenly he found himself on the ground and tumbling through the gravel trap. He picked his bike up and got going again, but lost any chance of winning.

At the front, the battle between the two Suzuki’s was fierce on the last lap. Elias put a pass on Hayden going into turn 2 and pushed him wide. It was kind of a dirty pass if you ask me. Hayden then did all he could to do something to get back by him in the last corner, but came in too hot and blew his exit. Elias crossed the line with the victory, with Hayden in 2nd and Josh Herrin in 3rd, giving him his first Superbike podium in MotoAmerica.

This weekend was almost perfect for Garrett Gerloff on the factory Yamaha YZF-R6. He was fastest in the early practice sessions of the weekend. He took pole position just over a second faster than second place, his teammate JD Beach, and claimed the new lap record for any 600 around the circuit at a 1:25.406. An incident in warm-up on Sunday didn’t slow him down, as he took the win 1.5 seconds over Beach in Sunday afternoon’s race.

The weekend was short for the KTM riders, as they were limited to a Friday/Saturday schedule due to a jam-packed event, but it certainly wasn’t short on fun. Current championship leader, Benjamin Smith battled Jackson Blackmon and Cory Ventura over both days. They all swapped positions in practice and qualifying, but it was ultimately Ventura who took the ‘W’ by over four seconds on Saturday afternoon after Smith and Blackmon both crashed on the first lap in turn 2. The rest of the field had a tight race, with second through fifth coming in within a second of each other. These kids have been racing hard all year and it was cool watching them rip as it brought back many memories from when I was that age.

From perfect weather, to the amazing fans and the community spirit, this year’s World Superbike and MotoAmerica races at Laguna Seca were phenomenal. Everyone seemed to have a great time, and I really loved seeing the camaraderie between the fans and the riders. Maybe being on the other side of the fence isn’t so bad after all.

I’ll be at the next MotoAmerica race in Napa Valley at one of my favorite places – Sonoma Raceway (or Infineon Raceway or Sears Point, whichever you want to call it). I hope to see my Northern California fans out there!