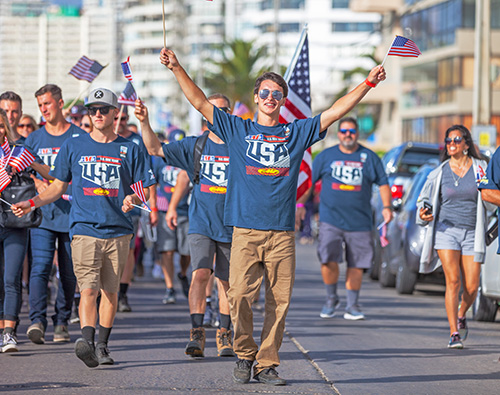 We’re excited to share the 2019 update on Dante Oliveira and his road back to the International Six Days Enduro (ISDE). Dante, an FMF / RPM / KTM Racing Team, Maxxis sponsored Northern California off-road rider, was the McGraw Powersports supported rider for the 2018 ISDE hosted in Chile last November. In his first year competing at the event, he took home a gold medal. You can check out the full race recap here.

Since the ISDE, Dante trained and prepared for the 2019 race season, which started in January. He is focused on winning the WORCS Championship – and it’s going well so far. This is his rookie season in the Pro class for WORCS and he’s currently 2nd in the overall point standings, just behind fellow KTM rider, Taylor Robert. Go Dante! He started out with a 4th place finish in Primm, Nevada, and since then, he’s been consistently on the podium for the last four rounds. In the most recent race at the Orleans Arena in Las Vegas, Dante led the pack for the first time for almost 10 minutes of the 40-minute race, which was made up of short, one-minute laps. He is also seeing success with big wins at much longer tracks like the Virginia City Grand Prix, where he was on the course for 4 ½ hours – and the Desert 100 in Odessa, WA which was made up of two 50-mile loops.

Dante’s talent is clearly multifaceted, as he’s able to dominate many courses, whether long and fast, or short and technical. To win the WORCS Championship, Dante says, “I need to work on my fitness so I can ride harder the whole race.” His competition is stiff, but this young and talented rookie is up for the challenge!

Bringing our journey full circle, Dante has already won two of the west regional 2019 ISDE qualifier races, meaning he is guaranteed a spot in the event, which will be hosted in Portugal this year. This will be an extra special trip for Dante because the Oliveira family is originally from Portugal and he has not yet been able to visit his homeland. He’s currently working on his Portuguese 😉

We look forward to seeing Dante finish off a strong WORCS season and dominate the field in Portugal – we’ll be rooting for you Dante!